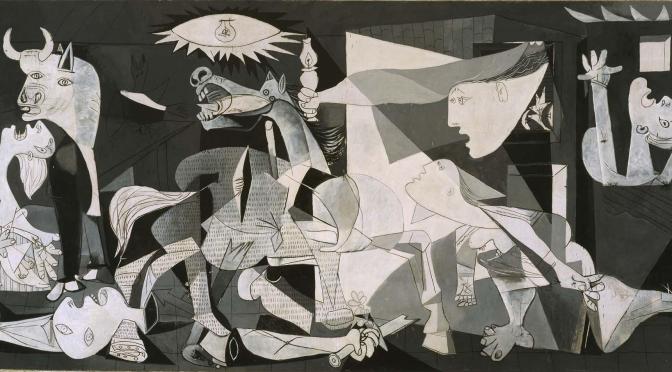 Madrid is a beautiful town full of museums, history, and incredible parks.  It is Spain’s central capital and has a population of approximately 3.25 million.  Madrid was a short ride from Valencia, but I learned an important fact, double check your train ticket the night before. Yes, I almost missed my train! At 8:53 am I realized my train was at 9:15 am. A half mile run with two 20 lbs backpacks, a taxi from the Estació del Nord train station to the Joaquin Sorolla train station, a misplaced ticket, another dash into the train station, and somehow I made it with thirty seconds to spare.

The Airbnb I stayed at was conveniently located right across the street from the Atocha Railway Station.

After working out a game plan I headed to the Reina Sofia Museum of Arts. On my walk over to the museum I saw a familiar Austin site, a Pub-Crawler.

The Reina Sofa was another grand museum with Picasso’s, Van Gogh’s, and many other paintings.

One of my favorites, the Picasso “Guernica” is massive, as well as incredible, but you couldn’t take a picture of it, so here is a picture from the internet.

Imagine this painting being 11ft 6 inch  x 25ft 6 inch. Now you have the “big” picture. Background: Spain acquired the mural “Guernica” from Picasso in 1937. When WW II broke out, the artwork was moved to the custody of New York’s Museum of Modern Art for safekeeping.  It wasn’t until 1981 that the piece finally returned to Spain.

“Pablo Picasso’s motivation for painting the scene in this great work was the news of the German aerial bombing of the Basque town whose name the piece bears.”

After completing my stroll of the Reina Sofia, I headed to the Madrid – Real Jardin Botanico Garden. This was a lovely and relaxing walk through a beautiful garden.

The Iris’ plants were incredible. Such a simple flower, but the colors were so vibrant!   As a child we had several different Iris plants, and it reminded me of my youth.

It was good to see some Agave plants, reminding me of home and Austin.

I ran across a couple of cute little ducklings enjoying a dip in the pond at the botanical gardens.

We never could get our “Little John” dwarf bottlebrush (callistemon citrinus) to grow like this!  This is actually a cousin.

A little lavender anyone?

I didn’t catch the name of this beautiful flower.

The roses were quite beautiful too!

One of my many meals while in Madrid.

I cannot tell you how much I enjoyed the artwork. After the Thyssen-B Museum I continued on down Paseo del Prado to the Palace of Cibele, also known as CentroCentro,

followed by the Plaza de Cibele, an iconic symbol for the city of Madrid.

Behind the Palace was the Puerta de Alcada.

I continued my trek down Gran Via and up Calle Fuencarral Street to the Museo de Historia de Madrid. This museum provides an idea of the evolution of Madrid both historically and from the perspective of its urban development.  You can see paintings, prints, maps, scale models, drawings, photographs, postcards, sculptures, precious metalwork, fans, furniture, weapons, coins and medals on display.

Much of the information was in Spanish, but it was still very interesting. Here are pictures of fans from the 1700’s – 1800’s,

and a beautiful table piano from 1785.

If you like parks, then you need to go to Park Retiro. It is a very large and beautiful park with many trees and paths covering about 345 acres. I entered the park walking up a large hill. People were laying in the grass under the trees, resting, picnicking, enjoying themselves.

There were paved paths for rollerblades, jogging, and bike riding. There were mazes of walking trails, and playgrounds for children.

Hiking through the park I came across a glass building (Palacio de Cristal ) in front of a small pond. Here I found guitarist, groups of people sunning or chilling, admiring the views.  Nowadays exhibitions of modern art are regularly scheduled inside the Crystal Palace.

Next was the Monument to Aflonso XII, King of Spain. Another fantastic sculpture/statue in front of a large pond or reservoir with recreationists enjoying the day rowing boats on the pond.

The Park Retiro was a nice treat, and for individuals who enjoy the great outdoors, a must see.

As I was headed for the Atochoa train terminal to leave Madrid, I stumbled across this nice surprise. This garden is part of the Atocha Train Station.

There is much more in Madrid, and I hope to cover additional pieces like the Temple of Debod, and the Basilica of San Francisco el Grande when I am back in Madrid in a few days.

3 thoughts on “Madrid Spain, Town of Many (Part I)”